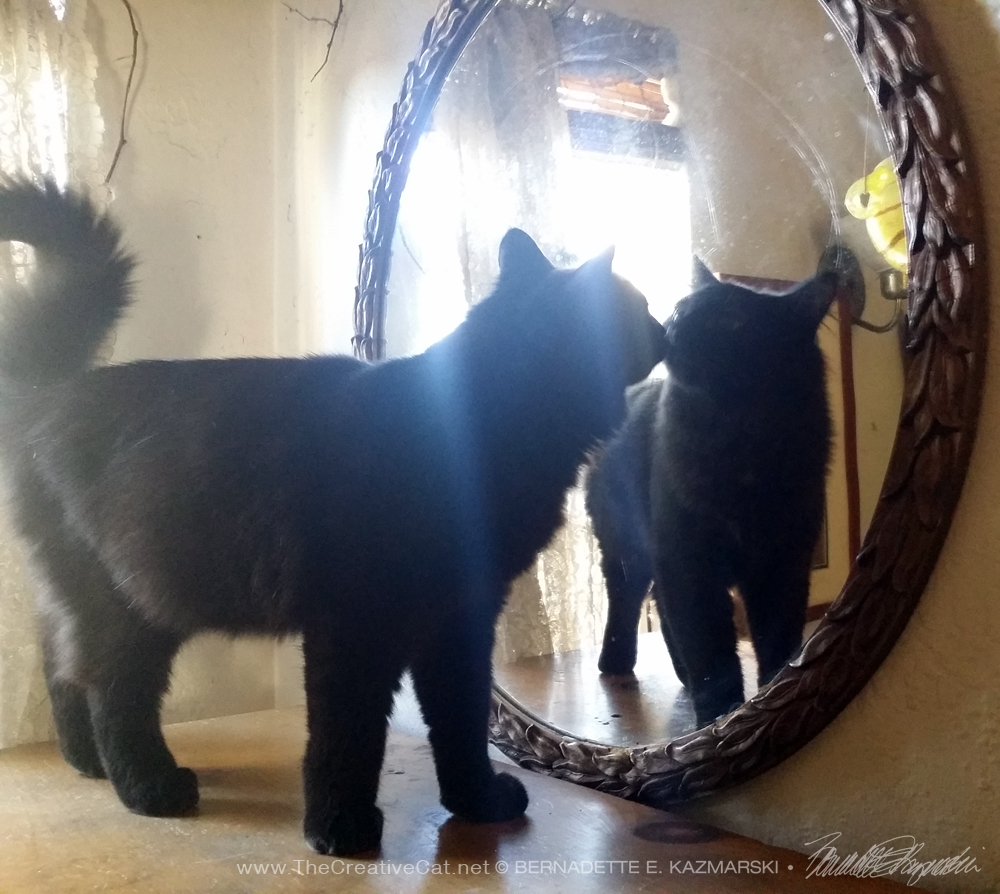 Startled, an unexpected
kitten before him, he
cautiously greets this unknown feline, offers
friendly gestures though it has no
true kitten attributes, no smell or sound. He
doesn’t know, of course, it is
himself he sees, for he
senses himself in a different way, the
horrors he endured before rescue
blurred in the distant darkness of his reflection,
and with trust he has found reaches out to
this hesitant, wide-eyed kitten with kindness
to share the lesson
he has learned.

Upon Seeing Himself in a Mirror © 2014 Bernadette E. Kazmarski, may not be reproduced in any way without express written permission of the author. Links to this blog are fine.

My poetry has won several awards of excellence or Muse medallions in the Cat Writers Association contest: “Pawprints and Raindrops”, The Gift of a Morning, and Once. Read about the awards here.

I wrote this poem in early November 2014 when Basil, then named Smokie, was about six months old and still easily surprised and intimidated by unexpected things, like a kitty he didn’t know, even if the kitty was his own reflection in a mirror. I saw the moment coming and had the chance to photograph this encounter, and I was very moved that instead of acting aggressively, which was not his style, or running away, as would be expected from a kitten who’d suffered some unknown trauma and nearly been euthanized because he totally failed his temperament test, even after fostering, he reached out to the unknown kitten with an act of friendship. Yes, love can change these things, and it saves lives.

Smokie had just discovered a few new places, and one of them was the top of the wardrobe where so many cats have sat to watch the day and nap. It has a great view down the steps and into both upstairs rooms, and right next to the bathroom door a kitty can just look around the door frame to see what’s happening in there. It’s a favorite place, but not all that easy to get to unless a ninja shows you how to stand there, jump up onto the windowsill, carefully turn around and leap straight up onto the top of the wardrobe, where Smokie encountered…himself, or at least, another cat.

He has seen himself in the bathroom mirror, but in this case he was confronted by a whole cat, not just a face that disappeared when he drew back. He can still be easily frightened, and stood kind of frozen for a second or two, then tentatively reached out to tap the unknown kitty’s nose, his first gesture one of friendship, just as it was when Bella came to live here.

He’s gotten used to himself now, and totally owns the top of that wardrobe. It’s been fulfilling to watch him change and grow.

2 Replies to “Poem for Saturday: Upon Seeing Himself in a Mirror”