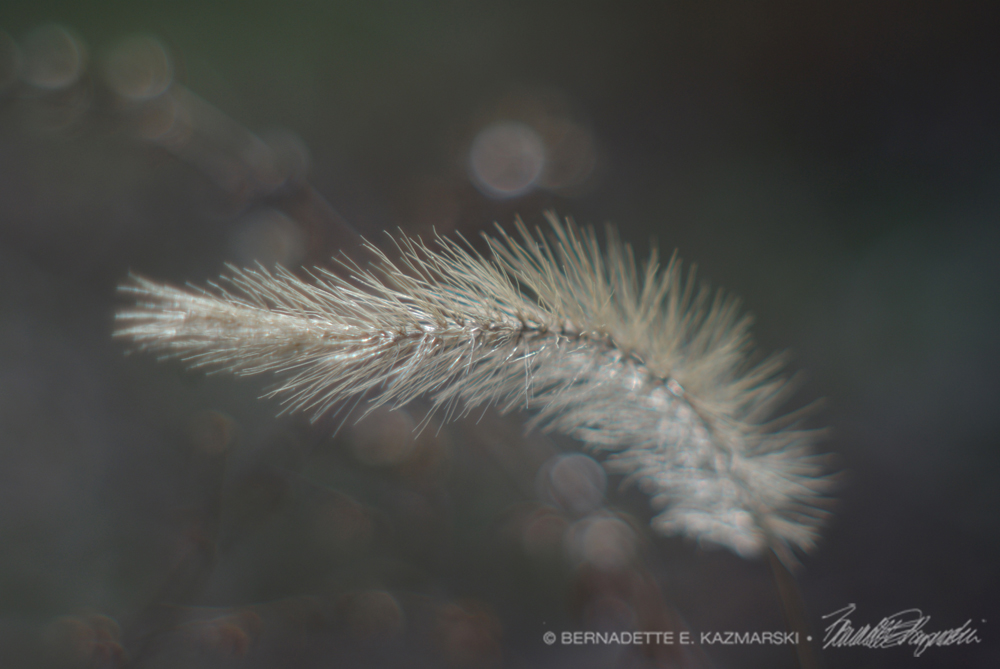 As the seasons change I look to nature for familiar scenes and welcome details held dear from year to year especially in my garden, my little patch of toil for the years I’ve lived here, beginning in 1990. Even though I’ve worked and planted and composted and  created raised beds and paths and the site holds probably all the memories I have from living here from all the time I’ve spent working and thinking there, I still find wonders, mostly in the spring when it all feels new again after a month or two of break, and sometimes intangible wonders as well.

This year (2017) I remembered a series of photos I’d taken in March 2009 which I called at the time “Winter Leftovers”, thinking of the ephemeral beauty of dried plants that seemed lifeless from afar but had so much character and detail when studied up close through the lens of my camera, natural sepia tones, tiny highlights, clouds of soft fluff and tiny spiky flowers, an entire universe in miniature.

The bright spring sun had shone at an angle from a faded blue sky in mid afternoon on a day just around the vernal equinox and I was late in planting for late snows and freezes. I leave the native plants standing in and around the vegetable garden for the residents of my backyard wildlife habitat to eat from, perch on, snuggle into, build tiny homes upon to weather the dark and cold season, but I was thinking of asparagus and potatoes and salad greens and time outdoors with two of my cats who always joined me in the garden, ready to work it all down and get planting.

But I didn’t. As I leaned into my spading fork the angled sun caught a sparkle on a delicate spiderweb smaller than the palm of my hand. I walked over to investigate and found a spider no larger than a grain of sand shriveled in the center. She had died long before but continued to cling there all winter long. Her web held up against any number of storms. Her eggs would have been laid on the stem adjacent to her web, and when they hatched the little spiders could have their first meal of the insects caught in their mother’s last web and use her web as a launching pad to their new life. I found the whole idea so moving, that the children the spider would never know were provided for by what she had done before she died, that on that bright March afternoon I put down the spading fork and picked up my camera and went through my garden looking for other such images. The afternoon was fading and with it the light, so we packed it up for the day and returned the next afternoon just for a session of photography.

What was most surprising to me when I went to review the photos in 2017 was when I looked at the other photos in the folder for that day, and what else I’d done in the morning. I had photos from the 54th floor of an office building in downtown Pittsburgh, quite the different perspective from the afternoon’s warm spring sun and attention to the details of desiccated native plants in my backyard garden. I’d been there for a hearing to contest matters with my mortgage company, Countrywide Mortgage, which had acquired my tiny mortgage in 2005 and had forced me into bankruptcy protection to avoid one of their illegal foreclosures in 2006. Despite the fact they and the company that took over their mortgages, Bank of America, were charged with so much wrongdoing, they still insisted I owed them the legal fees related to my foreclosure and fines on those fees and my attorney and I never did figure out what else was included in the $16,000 they said I owed them. Just the foreclosure and bankruptcy, though I owed no other debts, had hit self-employed me hard and taken time and finances away from growing my business, and keeping house and the idea of paying another $16,000 wasn’t even something I ever fully grasped because I knew I’d never come up with it.

It’s hard to say that a decade of financial struggle where phantom fees and charges were continually and unexpectedly added to my mortgage, and my mortgage payment, was a horrible thing because no one could really see it but me. Despite the financial issues I would not give up my home or my business and I paid everything they asked of me, taking all legal actions I could. Even if I had left this place I still would have owed the mortgage and would have had to settle it and also pay for a place to live, so I decided to stay here and just keep making a mortgage payment and somehow work it out. In the end I was offered a settlement by the new mortgage company that I could afford, and I own this house, though I paid far more than was ever planned.

But the more surprising thing was that, even though that situation lasted for a decade and really just ended the previous year, when I remembered the “winter leftovers” and that afternoon in the garden down to the details and the sun on my back and two cats who are still very dear to me, one who I would lose just a few months after that day, who were out in the garden with me, I didn’t remember anything of the hearing with my mortgage company, nothing of the struggle and hardship and paperwork and court dates that lasted a decade. I must have ridden home on the bus and looked at the perfect sunny day, and once I got home my inner voice, my inner guide, knew I needed healing. Instead of getting right back to work, I’d steal a little time for physical effort and something I loved to do, change my clothes, get my two cats and head outside and enjoy their exploration of the spring garden and work off the morning. I only remembered the poignant beauty of what was left in my garden and the beautiful story it had told me.