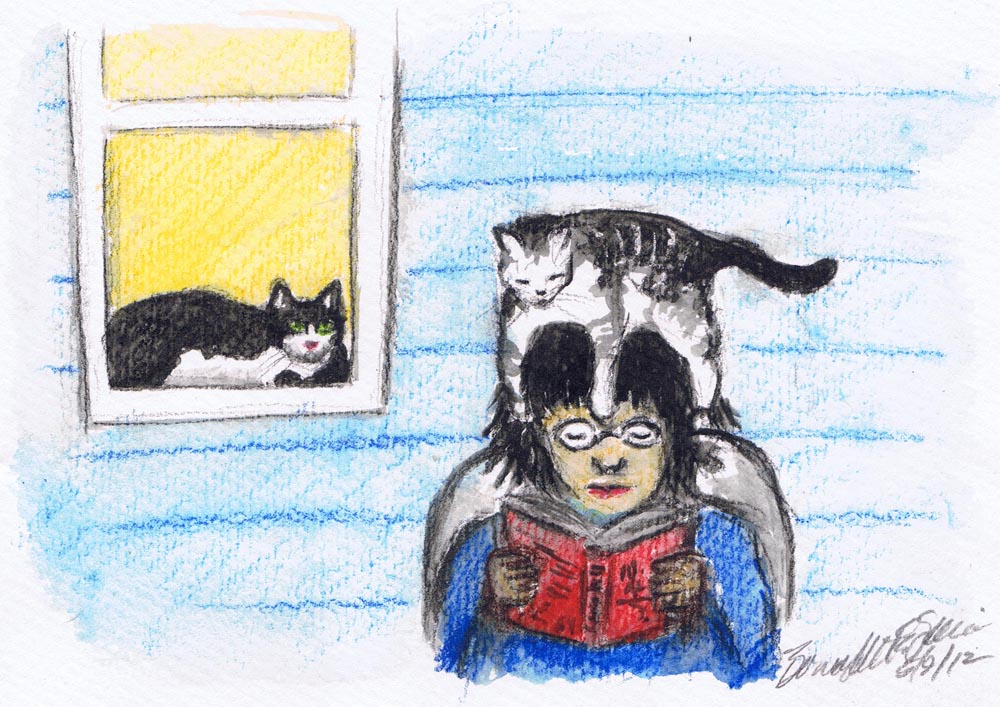 A little tabby and white kitty had joined the varied clowder that roamed in the back yards, often leave-behinds from renters who moved on without their feline housemates. As the brilliant leaves fell from the trees and brush between our yards I noticed her bright white legs while she hopped uncomfortably about like a bunny on the detritus of summer now sodden and brown with November rains. I saw her again a day or two later when the rain had stopped hours before and the weather was quite nice for early November. She was obviously not accustomed to being outdoors, and far too clean to have been outside for long. I noted the direction she was walking and went outside to introduce myself and assess the situation.

Was she an indoor-outdoor kitty taking a walk on the wild side, was she a leave-behind, was she lost? Why didn’t they come with a little note hanging on their collar? I knew I always risked “rescuing” a cat who belonged to a neighbor so I got to know as many as I could; this little girl was unfamiliar.

But I was too late to catch her. Before I even left my deck I saw her purposefully continue across the neighbor’s yard directly behind mine to the house next door to that, a four-apartment rental. She trotted easily up the steps to the porch at the back of one of the second-floor apartments as if she belonged there and greeted the woman who was sitting on a chair, reading a book. I heard a faint “meow” and saw her rub against the woman’s legs and then jump up onto her lap.

I knew the woman as another cat owner who had lived in that apartment for at least two years. She had a little black and white kitty who always sat in the west-facing windows of her apartment in the afternoon and evening, dozing in the sun. I had spoken with the woman a few times about cats in the neighborhood, inquiring if she had ever seen them or knew who they were, but we had never exchanged our names or our cats’ names. She never minded discussing our neighborhood cats but seemed to want her privacy and anonymity, and I understood her need to be able to step outside on her porch and read a book without being interrupted by a neighbor unless it was absolutely necessary. Finding out information about a lost cat was apparently a necessary conversation.

Was the tabby and white cat her cat? But she had insisted she was a one-cat person, and that her cat never went outdoors. I doubted that this cat was hers unless she had had a big change of heart and decided to keep an indoor-outdoor cat, and if that was the case, I doubted she’d be ignoring the cat’s fervent though wet and muddy greeting.

And she was doing her best to ignore it, putting the book between her face and the cat when the cat got between her face and the book, gently picking the cat up in one hand and placing her on the wooden floor of the porch only to have the cat leap nimbly onto the arm of the chair, then onto her shoulder and walk around behind the woman’s head. When the cat got up onto the woman’s head, trying to keep a footing on her hair, the woman patiently put down the book, picked up the cat with both hands, and set her on the porch once more.

Her black and white kitty was in the window right next to her, watching everything.

I had walked across my yard to the corner where I was a relatively short distance away from the second-floor porch, and things were not so overgrown then. I gave a hearty “hello” as the woman was setting down the cat and the woman looked up at me and waved. I asked if the cat was hers and she said it was not, but that it had been coming to visit her when she sat outside to read. She had no idea where the cat had come from and it had not been around for long; it was the woman who identified the cat as female. I told her the cat had every intention of being adopted into her household, and the woman said the cat was very nice but reiterated she was a one-cat household and was sure the cat belonged to someone, she was too nice not to.

I thanked her for her time and decided just to monitor the cat’s activities and ask a few of the neighbor kids if they knew anything about her.

Over the next couple of weeks I saw the cat a few times, not always heading from the same direction as if she was wandering, and looking a little more tattered each time. I would stop her and offer food and she ate it hungrily but always continued on to the woman’s porch. I remembered that we’d first seen her at the beginning of the month and it seemed someone had likely left her behind when they’d moved, intentionally or not. On warm or sunny weekend days the woman often spent a hour or so outside with her book and the kitty happily, a little desperately, perhaps, laid on the affection, performing metaphorical kitty headstands for the woman. When the woman was not outside the cat would stand on the railing of the porch, long legs straight and tail in the air and look in the window, or stand up and slap her paws against the wooden screen door, or sit on the woman’s chair. The black and white kitty would lie in the window, squinting and impassive.

On yet one more rainy day later in the month as I was working in my kitchen I saw the kitty on the porch and somehow, from that distance, felt her desperation. It was a cold and dark Saturday, slipping back and forth from rain to sleet and even a few wet snowflakes now and then. No little explorations or visits to my yard, I could see her legs were muddy and her fur clumped and wet.

She hopped onto the railing and walked back and forth, meowing, then jumped onto the chair, stood up with her paws on the sill and looked in the window. As a last measure of desperation, she climbed the screen door so she could see in the window of the interior door and clung there at an angle, meowing.

I had just witnessed a rescue, but who had rescued whom, only time would tell.

About the story and illustrations

This is a true story, from the early 90s, written in 2012. I’ve remembered it all these years because I was so moved by the growing relationship between the woman and the cat. I never did find out where the cat came from, but I don’t think it mattered because she was apparently meant to be with my neighbor. I never got to know the woman any better, respecting her privacy. Better to keep good relations with neighbors in the first place, and people set boundaries for a reason. We spoke often enough that if she had wanted to be more social she had the opportunity. If not for the cat’s insistence on being part of the woman’s life I probably would have taken her in long before that, giving her veterinary care and fostering her to find her a new home, as I did with many cats in similar situations who showed up in my back yard in those days.

I will add that when I watched her peel the cat from the screen and take her indoors, I simply started to cry. I have no idea if she kept the cat or not because she moved soon after, but I think the cat finally convinced her that she belonged with the woman. These sorts of rescues often have a touching or dramatic back story, but that part I can only guess.

But I also had these illustrations in mind all these years as well. This apartment building is still there, still blue, still has a deck with doors at the backs of the apartments and two cats who live there; I think of it every time I look at the building. I’ve always wanted to share this story and the images I’d visualized all those years ago; now I have the opportunity. I’d intended all along, from the time I witnessed this rescue, to write the story and illustrate it, and so I did in May 2012 to celebrate officially moving The Creative Cat to a self-hosted platform so I could offer my work in many more formats.

One of the reasons for my Daily Sketches has been to practice, just practice—sketching my cats in various poses and activities, working in different media and different styles; through this I grew to enjoy working with watercolor pencils, which is the medium I chose to use for these illustrations. The daily sketches are experience in working quickly from life, but I also want the experience of working with a visualized image with no live models, though I’ll admit I did stretch out Jelly Bean to get a better idea what the kitty would look like clinging to the screen. Illustrating one of my stories gives me this experience in working from a visualized image.

I’ve also been learning to design and format e-books for my own sake and professionally—I’m a designer, I had designed books for two publishers years ago, this is another exciting skill to learn and to offer to commercial customers as well as for my own writing. This book is available on Amazon.com, but I’d love to share it with those of you who have electronic readers of any sort. At the end of this article I have links to electronic files for download. So please read the story here and download it if you can, and let me know what you think!

Read a review by Ingrid King of The Conscious Cat.

The cover design is for the e-book, and I’ve never been really happy with it. One of these days I’ll actually publish it in a small volume and create the cover I want.

And now for the downloads

I don’t have any e-book devices but I can read them on my computer. I use both Kindle Previewer and Kindle Cloud Reader to read books intended for Kindle, and a program called Calibre to read e-books in other formats.

Most electronic readers can open an EPUB file.

Find it on Amazon.com.

And for the 2016 anniversary of sharing this story, I finally recorded it. Some day I’ll have to get a real microphone so please pardon a few little blips, but I enjoyed reading it with you listeners in mind. Click here to see the video on YouTube, or watch it below.

Also find other recorded works as poetry, and visit my YouTube page for all my videos and recordings.

Help me publish my poetry and anthologize my rescue stories

I’m very excited to have finally recorded this after years of thinking about it. It’s really my beginning plan for recording all my books, and this one I’ll expand to include other stories I haven’t yet written about. But to do that I’ll need to purchase a better microphone and a quieter chair! Between that and printing and the time it takes to create these things, so I’ve set up a Patreon page through which patrons can pledge a certain amount each month to support these projects. You can read about it here or visit my Patreon page.

Read more in this article on The Creative Cat and Visit my PATREON page.