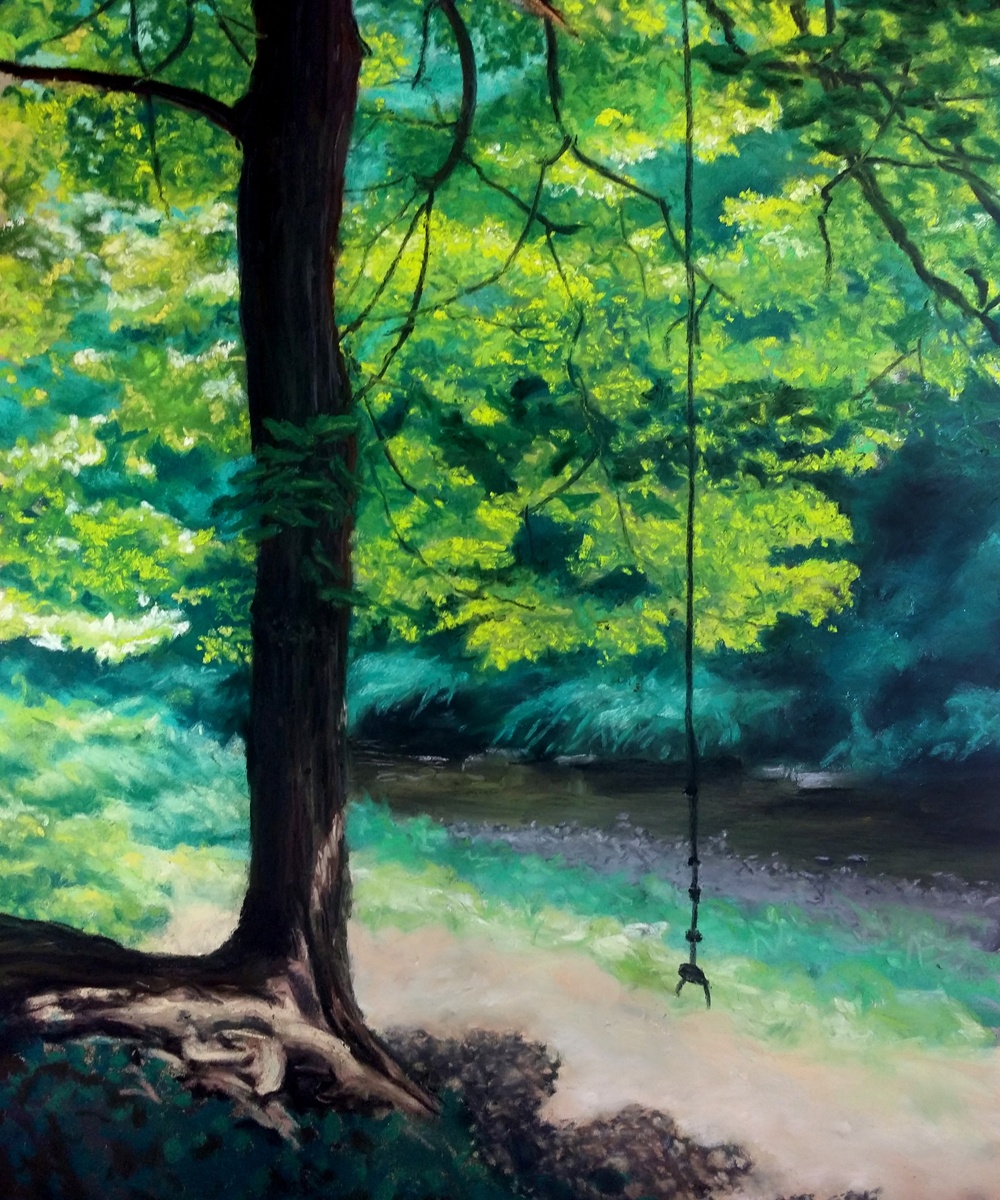 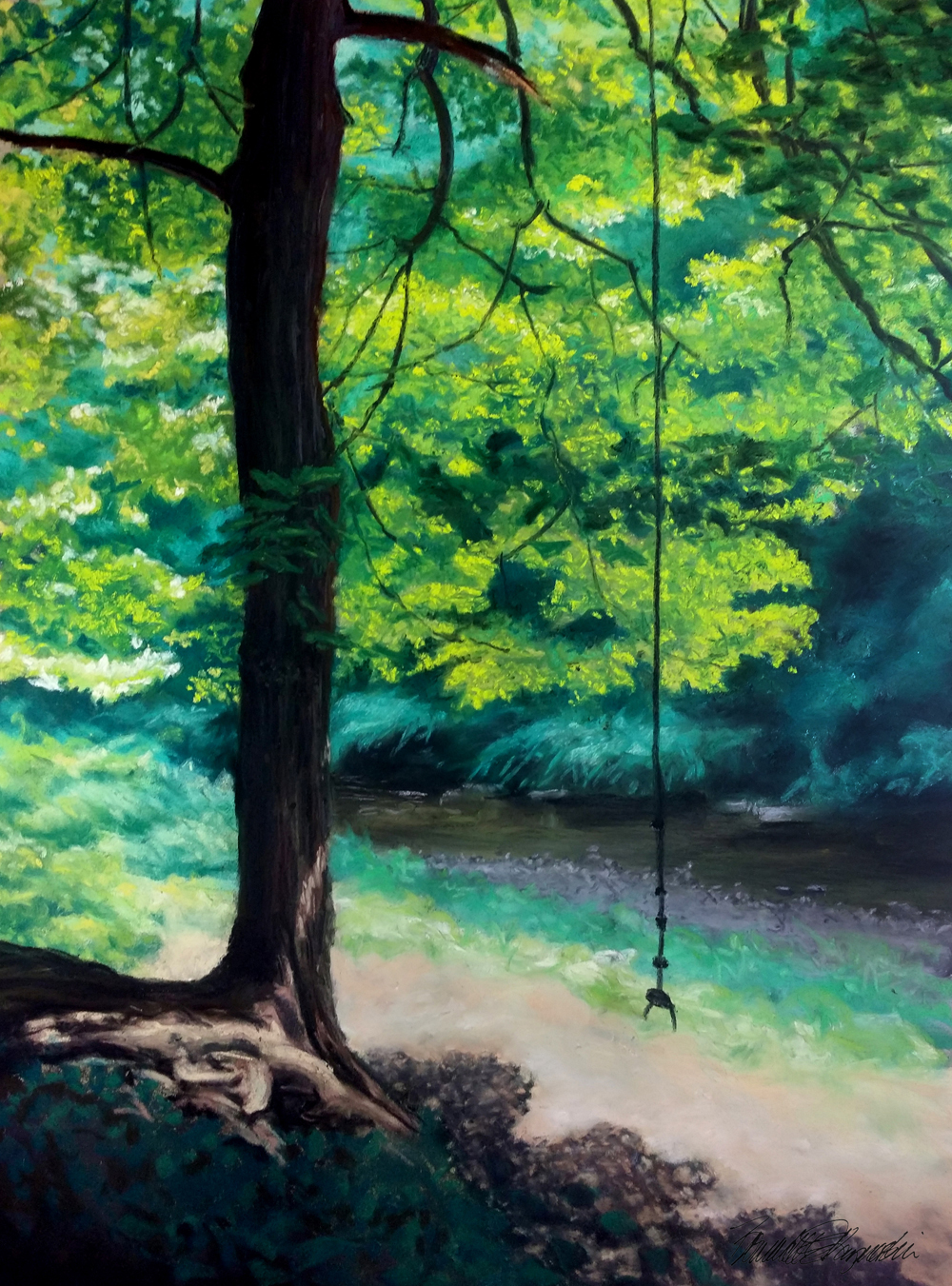 A cloudless burning hot August day made bicycling on the crushed limestone of the former rail line trail unbearable, sending me off the trail when I found a little path into the immediate cool shade of the woods. As I walked my bike down into a shallow portion of the former limestone quarry, sycamores and maples and beeches grew straight and tall around me, their canopy far above. Mounds of unquarried limestone rose around me like decaying derelict sailing ships with lichen clinging in mottled patches and garlands of ferns, their roots firmly stretched deep in between the layers of history. Rounding a mound I heard the riffling of Robinson Run in the distance and saw the light of a clearing; ah, a new spot to visit this twisting little waterway, cool off and explore for new and different wildflowers, neat rocks, new photos, and potential paintings.

I rounded a bend on the woodland trail’s meander and there, just ahead, surrounded by the darkness of the woods but with the light of noonday sun behind it, I saw a rope swing.

The maple tree from which it hung rose straight up from the last rise as the land gently sloped down to the bare soil and then gravel which became the stream bed, a natural little beach formed by frequent enough high water events that shredded anything tall that tried to grow there. The tree’s roots were completely exposed on the side facing the stream as the same high water events had washed away the soil. I stood on the maple’s roots next to its trunk with the swing right in front of me and looked at the layers of leaves in the reach of this tree’s branches, dark underneath but sunwashed as they rose above, and the dark lacy shadow they cast over the bare soil below, a deep canopy protecting me and all else from the burning brilliant sunlight on the stream and hill beyond.

I parked my bike on its kickstand, lifted my camera bag and dropped my backpack off my shoulders. I stood barefoot on the maple’s roots at the edge of the rise, reached for the rope and pulled it toward me, trying to decide if I should get my feet on the knot or just hold onto it with my hands. Yes, even nearing 50, the question for me was not “should I?” but “how should I?” I got a good grip on the rope above the knot and tucked my feet up under me, swinging out into the air, swishing my feet toward the sunlight ahead, then swinging back and kicking off the roots a few times, until my hands were tired and I let myself drop back onto the roots, letting go of the rope and putting an arm around the tree.

Even as I’d been swinging I’d envisioned the painting. It was just as I’d seen the swing as I approached the tree, the green leaves above and around, the dark trunk and soil, the simple rope swing silhouetted against the brightness beyond, the lacy shadows on the soil below, the hot sun outside the deep shade. I reached for my camera and took as many photos as I could for angles, for detail, closing my eyes to imprint the sound of the water and the stillness of the dark woods.

Five years later I still hadn’t painted it. I am on the committee for that trail, and each year we host a two-day fundraising festival in late August. I manage the website and handle the social networking, and typically volunteered to sell and serve food in the organization’s booth during the event. I had mentioned to the organization’s president my idea of a painting of the rope swing and her eyes lit up with interest; she’d purchased a few other paintings. For several years I’d considered having an exhibit, on the trail, as part of the annual event, and the decision to finally paint the rope swing also made me decide that was the year to do it.

“The Rope Swing” was the principal image I envisioned and became my symbol for that first exhibit in 2014, “Sun Shadow Ice & Snow: Seasons of the Panhandle Trail”. When I wasn’t sure if anyone would be interested in artwork of the trail at all, “The Rope Swing” drew people in, telling me stories of swinging on the swing, playing in the woods as kids, high school parties by the stream, bringing the kids there years later, and using the trail today. The organization president purchased the original painting, and I’ve sold many prints as well. Year after year since then, it’s my most successful exhibit because of how much all those people love the trail and the woods they grew up with, or moved there to enjoy, and everyone seems astonished to see their trail and woods as subjects of artwork. If not for the strength of that image of the rope swing in my mind and in a frame, it may never have come to be.

This essay was first published in the Summer 2019 issue of Woods Reader Magazine. Read more about the published article and the magazine.