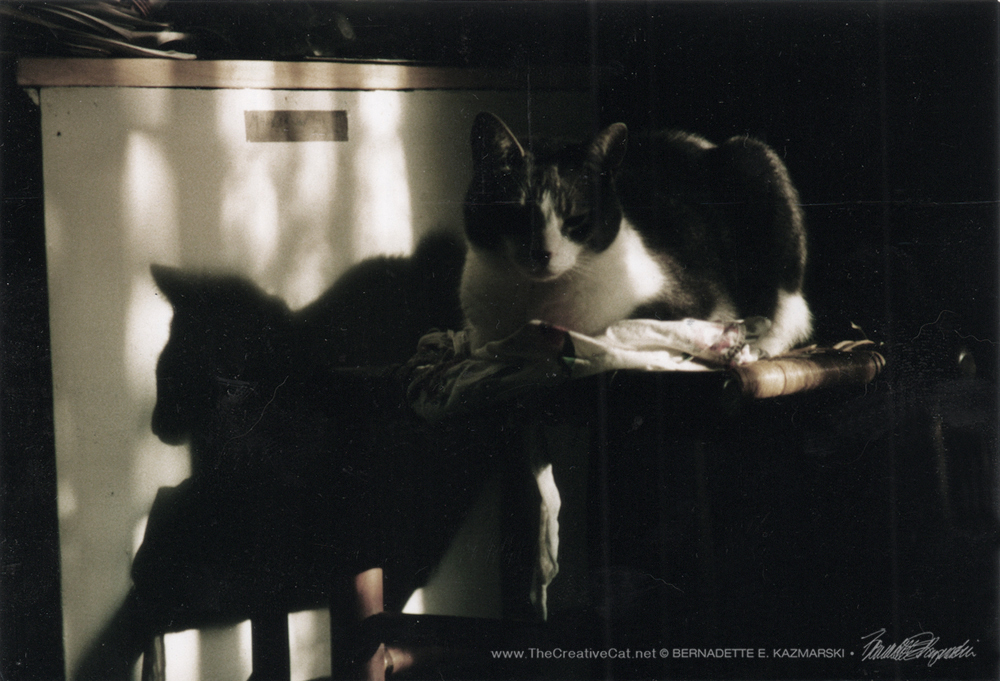 I remember the night Hurricane Katrina was headed toward New Orleans, partly scoffing at the hyperactive media reports and partly worried that the storm of the century really was heading for the Gulf Coast and knowing that, if it did, many people, most people, would not take it seriously. For all the dire warnings, natural disasters rarely fulfill their potential so it’s easy to sit back and wait for a while, much easier to stay in the place where you feel the most safe and guard the things you hold most dear; just stay home. At the beginning, we can never know the final impact of the event, or what the disaster will encompass.

And sometimes a public event marks a time or a circumstance in your life, in fact stands as a metaphor for your circumstances, even though it has no connection with you or your life at all; yet, whenever you encounter a remembrance of that event, it brings back that time in your life as if it was a slideshow playing for your review.

I don’t have a television. I heard about the storm on the radio and read about it on the internet, then visited The Weather Channel to actually look at the meteorology of it. I would naturally avoid all the hype of 24-hour news stations making a story out of possibly nothing in the slow news flow of late August. The only reason I saw any television coverage was because it was on in the waiting room of the animal emergency hospital where I was waiting for the diagnosis of Namir’s sudden, frightening condition. I paced all night long between visits from the attending veterinarian as they x-rayed, blood tested and medicated Namir, then placed him in an oxygen cage. The veterinarian’s face was blank to grim, though no final word was given until nearly dawn.

I’d noticed that Namir wasn’t his goofy self for a few days, just subdued, then on that day he had begun crouching on the floor instead of sitting on my lap or my desk. I noticed his breathing was shallow, he wouldn’t eat dinner. He had had a compromising bladder condition for several years so I always observed his activity and took action with whatever seemed appropriate, but these symptoms were not indicating that condition. I had talked to my veterinarian and we’d decided if his condition didn’t change I’d take him to the emergency hospital. He looked up at me imploringly in the evening, those lovely, slanted, gentle tourmaline eyes telling me this was serious. I called the emergency hospital, packed him in a carrier and drove with cold, stiff fingers and my own shallow breathing, knowing this was not good.

As the veterinarian and technicians went through their paces and I watched Katrina spin toward New Orleans, I was sure, in my middle-of-the-night fearfulness, that the world was really coming to an end. I took hope for both New Orleans and Namir when the storm was reduced to a Category 4 sometime in those hours; even the smallest improvement could have a vast positive outcome.

Yet as the dawn began to open details in the black outside the windows the veterinarian told me that Namir had developed congestive heart failure through hypertrophic cardiomyopathy. I fully understood the detailed explanation the vet gave me, following his sketches and descriptions in my own visual language, visualizing Namir’s damaged heart inside his delicate feline chest, struggling to move the blood through but not quite moving all of it every time, the blood circling and swishing around in the chamber, the walls thickening, the fluids building up instead of washing away. I understood that Namir was in very serious condition, that the condition could not be cured.

The hospital closed at 7:00 a.m. being only for overnight emergencies, but in the same rooms the specialty clinic opened at 8:00 a.m. Namir would stay there and see a doctor who specialized in his condition the next day, have more comprehensive diagnostic tests done.

They allowed me to say goodbye to him in the oxygen cage. I couldn’t touch him, and he didn’t come to the window but crouched close to it with an IV in one leg and several shaved patches and looked at me with those same eyes, but instead of the worry, near panic, I’d seen earlier, I saw hope, and perhaps he saw the sadness and fear in my eyes temper with it. We would work together on this, no matter what happened.

Katrina was reaching landfall as I drove home through the growing dawn and early morning traffic and I equated the gray misty light with the howling gray images I’d seen of New Orleans and elsewhere along the coast, pondering the veterinarian’s prognosis of Namir’s recovery: about a month with no treatment, six months with medication and careful observation, perhaps a year if we were lucky. Even with recovery his quality of life might not be optimal, he might actually experience a lot of discomfort and even great pain. I would know more the next day after an ultrasound and other tests.

At that time in August 2005, I was occasionally dosing Stanley with sub-q fluids for chronic kidney failure, but he was overall well—amazing for being somewhere past 20. All the others were fine, Moses at 19, Sophie at 16, Cookie at 13, Kelly at 11 as was Namir, and even the two new senior fosters, Peaches and Cream, estimated at 15, were adjusting well.

Namir’s loss was the metaphorical storm I was waiting to make landfall, but where I thought I’d be losing Namir first, in the following year, 2006, I would lose four members of my household, my four oldest cats, and three of them my oldest friends, Moses, then Cream, then Sophie and finally Stanley; shortly after Stanley I’d lose the kitten I’d taken in and simply adored after all that loss, Lucy, at 15 months. It turned out to be a much bigger storm than I had ever considered it could be.

And Namir lived almost four years with his condition, and hardly evidenced any discomfort though he hated his twice-daily medications and needed to stop back at the emergency hospital for a tune-up now and then when he slipped into congestive heart failure. I don’t know how many times in those four years I said, “Namir was first diagnosed with congestive heart failure the night Katrina hit New Orleans…” Namir and I certainly had a better outcome and what we experienced in no way compares with what happened there, but whenever I hear about Hurricane Katrina I remember that night when my own storm began, my own little life inexorably pulled apart by circumstances beyond my household’s control, but in much the same way as the aftermath of Katrina it was the hidden reserves of strength that determined the final outcome, individuals pooling and sharing their strength and supporting each other.

I heeded my own natural disaster warnings as best I could with the information I was given and we’ve reached the other side. Within the next 22 months I would lose Moses, Cream, Sophie, Stanley and my kitten, Lucy, at 15 months. Now I hope that my storm is finally over for a while. I know that I will have losses again, and with older cats likely I’ll have a few illnesses to treat. Even though Peaches hasn’t seemed to age a day since she came here and can still jump right up onto the kitchen island where she eats, she is 19 years old. Cookie hasn’t seemed to age since she was about 3, but I can see her slowing down and experiencing a little hearing difficulty, though we act as if we don’t notice. Little Kelly, who has to be at least 15, hasn’t shown any diminishing of ability and it’s hard to imagine her as a senior. My “Golden Girls” as I classify them…And I now have a big jump in age to Mimi, who is likely 6, then her kids, who just turned 2, though as I learned with Lucy and FIP that illness and death have no recognition of age.

After all this I was surprised I haven’t been in pain over Namir’s loss, considering the big personality he was and how close we were. He left strict instructions with “the kids” on my care and feeding and the greeting of guests, however, and I have never felt alone since Namir’s been gone—I’ll be writing more about this later, now that I have a perspective. But it hasn’t been just Namir’s loss, but all the others, too, all of them together, through it all knowing that I’d lose Namir, too, and finally I feel that process is complete.

The one thing I can’t avoid is that in two months I haven’t done much that’s creative—no blog entries, no new poetry, I’ve had to drag myself into my studio and still I’ve only done one piece of artwork, only a few photo sessions and all the other things I’ve done daily for years to keep my creative intellect in shape have just been neglected.

I know why that is. That’s the very core of myself, and in opening myself up to those creative experiences I leave myself vulnerable to hurt. It’s easy just to live on the surface as if floating on clear water, able to look at the beauty of the depths but frightened to go there, even though the risk, the plunge, the exploration and the return with new insights to share far outweighs any pain that might be experienced in the endeavor. So I dove deeply into it and designed a set of a dozen animal sympathy cards to capture those insights and offer them to others to use to recognize and share the losses of others.

Now that the deepest part of my grief has passed, I’m ready to finish and fulfill the things I’ve planned, and to move on with new things. The hardest part of grief is letting go and feeling that who and what you leave behind will be forgotten, but we leave behind and let go in a million ways every day without ever knowing. Namir came to me with Kelly one year after I lost the love of my life, my Kublai, and if I had kept myself closed off and held on to Kublai’s memory for fear of his being forgotten, I would never have known Namir and Kelly which would have done none of us any good, or any other of the foster cats who became loves, or the people or the places I’ve known and experienced since then.

So I’m a little out of shape, but it’s never taken me too long to get back into it before. I love this time of year, and probably most inspired by it, when summer changes to autumn and I can feel the pace of life slowing a little, the pathos of the passing of frutifulness, but welcoming the harvest, and a rest.

And I have a wonderful feline portrait with which to begin my new season. I’ll post the first update in a day or two and update the images and other thoughts regularly.