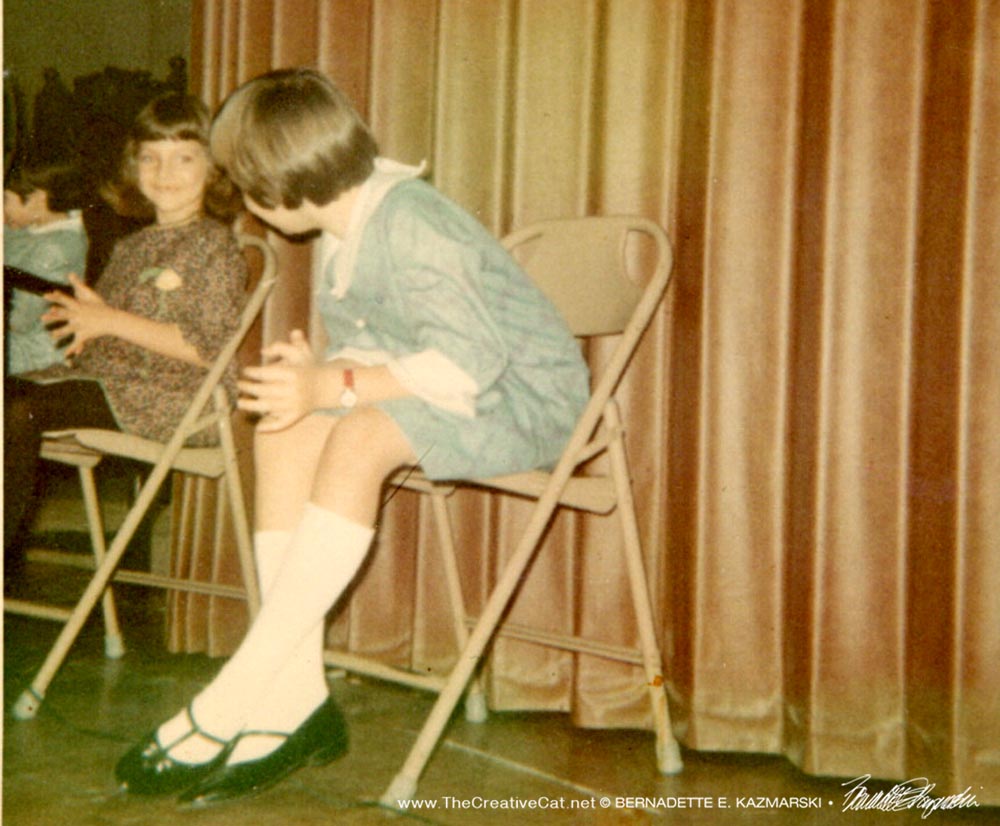 When I was seven years old, my sister entered me in a beauty contest for first graders. That’s me on the left in one of the few photos I have of me from my childhood, dressed kind of like I do today, flowered dress and tights, hair cut with bangs and curly wavy long in back; some things never change. I did not win, and I don’t know who did. I guess it wasn’t important enough to remember.

I do remember that 1968, the year I went from first to second grade, was a very frightening year, and I remember the things that happened that year as I moved out into the world; I can picture me at that time, and remember. Two very public and very respected people were killed in public places. People cried in public. Riots happened and we saw cities burning like something from a scary movie, except it was real life, and people were hurt and killed, real people, like people I knew, and they lost everything they owned.

We heard about the Viet Nam war on every radio news cast and saw it every night on TV. Those people were being shot at and shooting at others in places with strange names, but it was difficult to determine who was who, and what was right and what was wrong, and the news didn’t really make that clear. A plane was hijacked to Cuba, people taken hostage, big words for a first-grader but I knew what they meant, and I knew it meant those people hadn’t done anything wrong, yet they were taken to a place they were frightened of and could be killed.

And black people, like the few I knew at my Catholic school, were also fighting, and being killed, like the people who had lost their homes in the riots. My black friends seemed safe, but from what some people were saying around me I really wasn’t sure.

It seemed like people were being killed everywhere, and that this country, and the world, were not a safe place to be as I emerged from my suburban neighborhood and went to Catholic School. My world was small. I thought these things happened in downtown Pittsburgh, six miles away, and in the tree-covered hills around us in Western Pennsylvania.

We called him Martin Luther King then, no Reverend, no Doctor, no Junior, and I realize now, not allowing him the respect he deserved. But when he was shot and killed, and time stopped as adults held their breath wondering what would happen, I remember hearing about the dream, and freedom and wondered why some people couldn’t have it like I did. In my simplistic first-grader reasoning I thought they should live like me and had no idea why things were as they were.

I remember the word “service”, and how we needed to help each other, no doubt echoing what I was also learning in Catholic school, which was very much about public service and reaching out to people with less than we had and sharing, making sacrifices.

And I remember hearing that we needed to do this in a hurry, we could not wait because…people were suffering, and they were dying, because they did not have the same rights as others, as I did. And other people didn’t want them to have those rights, either.

Children often feel they are responsible for needs in their environment. I wanted to do something, but had no idea what I could do, or when, or how. I looked to adults for answers, but they all seemed to be waiting for something to happen, looking for answer just like me.

I decided I would just be nice to everyone.

A decade later, after witnessing the strife and changes from 1968 to 1978, I read Letter From a Birmingham Jail, which speaks much of time, and there it was, …”the time is always ripe to do right.” That concept of not waiting for the right moment, the “fierce urgency of now” would appear in many of what I read of Dr. King’s writings. And it answered the question I’d had a decade before.

The time is always right to do what is right.

Yet for many people conditions have not changed from what they were in 1968. The time is now.