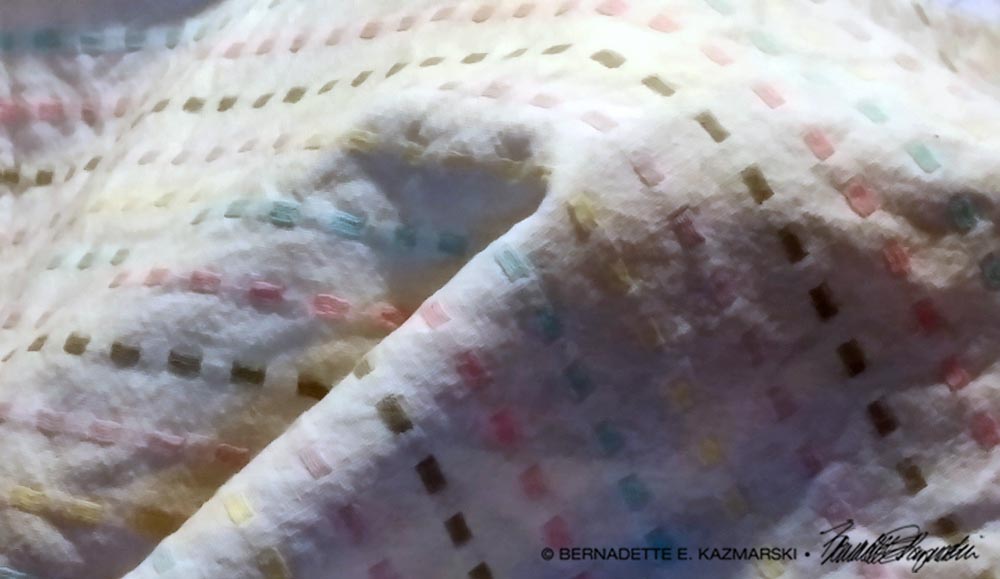 I have a white cotton napkin with a woven pattern of broken stripes like dotted lines in pink, blue, green, yellow and violet. The colors are faded now and it’s spotted with stains I can’t remove, but each of those stains is a memory as bright and clear as the colors once were of a series of special Christmas dinners.

I didn’t use it as a napkin, instead it lined and covered my little bread basket when I hosted my mother and brother for these dinners. Each of them lived in personal care for very different reasons and quite far apart. I was responsible for the welfare of each of them which included not only critical health matters but also social time. Their lives would never be “normal” again, i.e., the life they had lived before their health crises, but I would do as many things as I could to give them “normal” moments. That focused on holidays, and food.

In April 2000, four months after I’d left my day job to become a self-employed commercial artist working at home, a 2:00 a.m. phone call sent me to the trauma unit where my brother lay unconscious after suffering a traumatic brain injury in a fall. A lifelong alcoholic, often homeless, his options at age 43, if he recovered, were to try to make it on his own, which he’d always failed to do, or to move to a group home. I gave myself a crash course at other options, knowing his behavior would make a group home a total fail for him. I set a path of recovery with the help of many social workers, doctors and therapists.

Moving in with our mother after rehab was a possibility, but as I drove with our mother to visit him twice weekly for several months, I noticed her voice change, her strong personality soften, and intuitively knew something was wrong and that move was not a possibility. I moved my brother from the physical rehabilitation facility to a nursing home 50 miles away from me, the only one that would accept a 43-year-old 6’4” former alcoholic with daily grand mal seizures, though he was ambulatory, talking and taking care of himself. I was grateful for their understanding and generosity.

I started working with my mother’s primary care physician to find the source of her changes. An exam and basic tests found nothing and the doctor quickly grew annoyed at my regular phone calls with what I saw were new developments, she saying my mother was fine. I persisted, the doctor said she’d order some x-rays just to confirm what the blood tests had shown, and there on the chest x-ray was the spot on my mother’s left lung. It was almost too small to biopsy, but that biopsy showed it was small cell carcinoma which needed to be removed as quickly as possible. At age 76, a smoker for 55 years with heart disease and mild emphysema, she was still a good candidate for surgery. We planned her surgery and the tests leading up to it, and because she lived alone, me within a mile, I looked for assistance for her care and let the neighbors know.

Her surgery went well, but her heart disease kicked up a fuss as she recovered, causing blood pressure spikes, seizures and a few days later she suffered a stroke. She was not in a coma, but in a state called vascular dementia, awake but not responding to her surroundings. Doctors can’t predict if or how a person will recover from this because the vascular activity can cause brain damage. As it persisted for weeks with my mother on life support I moved her to a critical care hospital. The length of time and lack of change indicated she would likely not recover at all. Orphan’s Court appointed me her legal guardian and I began to organize her home and papers for the eventual decisions, visiting her daily, usually twice, and bringing my brother from his nursing home to visit weekly.

But about six weeks later during a visit she turned to look right at me and, because the tracheostomy tube prevented her from vocalizing, simply mouthed “coffee”. I laughed! Wow, that was some nap, I guess you would need coffee! Yes, she did recover, and ended up going back home after a few months of rehabilitation. But she was weakened and developed pneumonia or congestive heart failure frequently enough that the following autumn an extended stay in the hospital led to a move to a personal care home, which became permanent.

Just a month prior to that I had moved my brother to an assisted living apartment as he entered a program to give him continued physical, occupational and daily living therapy. Both of them kept me busy with doctor appointments and paperwork and hospital stays, and I was still self-employed with a fairly busy business, but holidays became more important than they had ever been.

I love to cook, and they ate nourishing though institutional meals and wanted home cooking. I made plenty of post-parade meals and cookouts on Memorial Day, Labor Day, Fourth of July as we celebrated our mother’s birthday. The personal care home always invited my brother and me to an Easter meal. But Thanksgiving and Christmas, vegetarian though I am, and though there were only three of us, I made a huge amount of food and desserts. I could barely afford it, and both holidays fell during a very busy time for me as both a commercial artist preparing advertising and campaigns for commercial customers and commissioned paintings and gifts for fine art customers, but I never questioned the time or the money.

The two places were at least 50 miles apart and the journey took quite some time on both highways and back roads. I cooked the dinner at my house and in mid-afternoon set everything aside to keep warm, hopped in my car to pick up my brother first as the farthest distance, and then our mother, closer to my home. I sat my mother down with a tiny glass of wine and set the napkin-draped basket of fresh warm biscuits and the butter dish next to her as she remarked on that year’s table setting. My brother mashed the potatoes, I served their favorite broccoli with cheese sauce. They piled their plates and ate as much as they could hold. We exchanged small practical gifts, I packed leftovers for each, then we got back into the car so they could get back in time for evening medications.

There had been much unhappiness through the years, and no small amount around Christmas itself, but together, we created a tradition for just a few years, made from what we could manage to do within physical, social and medical constraints. My mother and brother are both gone now, but every time I see that napkin I remember the basket of warm biscuits, and my mother pulling one open to spread butter in my warm and bright kitchen as the sun set on Christmas Day.

I submitted this story to the Chicken Soup for the Soul people to be included in an anthology of stories about holiday traditions. The book has not been published yet, but we are permitted to share our stories on our personal blogs. I’ll be sure to note if the story was published.