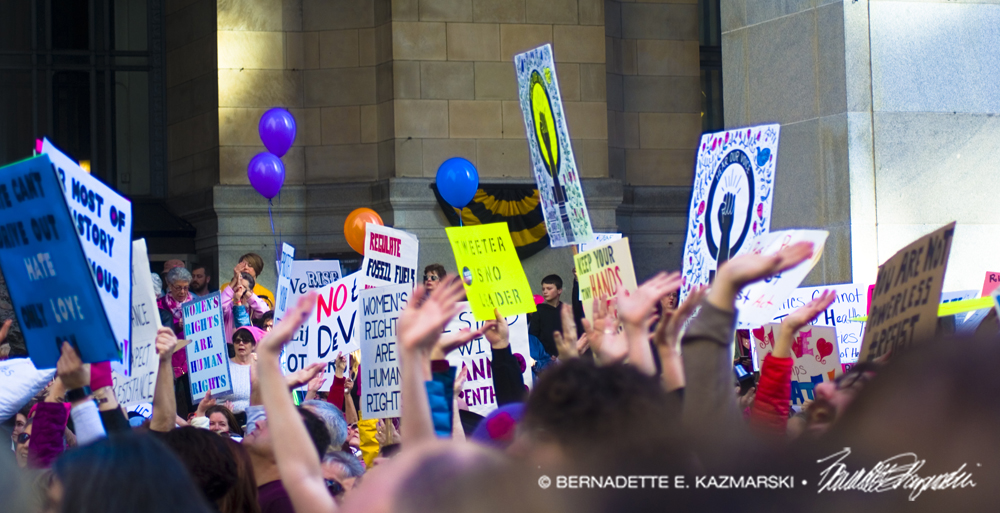 I joined in the Pittsburgh Women’s Sister March on January 21, 2017.  Though the organizer had said her initial permit was for 400 people and by January 20 only 3,000 had confirmed they were going, the estimate of participation was actually 25,000 people, whole families, of all ages, genders and gender identities, skin colors and concerns. The march was very organized and completely peaceful.

The march was part of the main Women’s March scheduled for that day in Washington D.C. and was initially focused on preserving women’s rights to employment and pay equity, reproduction and personal safety we felt we’d finally achieved. Many people feel threatened by the remarks both current and historical the newly-elected president has made about and to women as well as the acceptance and normalization of those remarks by other citizens in this country, and fear both a backlash and a change in laws regarding protections for women.

But no one handed out signs or banners to carry, or gave a specific reason to march. Most of the signs were handmade signaling that most people had found their own reason to join in and shared that reason with their own creation. Issues ranged from Black Lives Matter and civil rights for all minorities and people of color, LGBTQ issues including marriage equality and transgender rights to declare themselves for their own gender identity, a living wage for all workers, immigrant rights and protections, disabled rights, affordable health care and more as well as comments challenging and refuting the president’s own remarks.

In the 1970s Virginia Slims cigarettes were marketed with a clever slogan you could sing: “You’ve come a long way, baby, to get where you got to today.” A commercial illustrated that at one point in history women were not permitted to smoke and were punished for it, but now they had their very own cigarette brand. Not commenting on the clever marketing of cigarettes, smoking wasn’t the only thing women were not legally able to do for most of the time this nation has been a nation. Women were legally unable to vote until 1920, fewer than 100 years ago, so they couldn’t even use the democratic process to assure their own rights. Between the time we were finally legally permitted to vote and the early 70s we did come a long way in education , employment, housing and more, but even to today, pay equity and equal opportunities in employment are still an issue, and the Equal Rights Amendment to the Constitution, passed by Congress in 1972, is still not ratified by all the states and has never become a part of the law of the land.

I was not old enough to be employed in the 1960s, but I remember when employment ads could specify that the job was not available to women, even if women were capable of doing the job. It was also legal when women were hired or fired based on their appearance.

I also remember when Title IX was passed in 1972 stipulating that schools receiving federal funds had to give equal opportunities to female students in academics and sports to give women an equal opportunity to distinguish themselves and qualify for scholarships or better employment opportunities after graduation.

I also remember starting to work as a typesetter in the early 80s and being told that setting type was a man’s job, even though exactly why was never explained to me, though I believe it had something to do with setting “hot type”, or making the metal plates that had traditionally been used in printing. We were computerized by the time I started as a typesetter, but apparently even composition was a man’s job.

When I began freelancing and painting signs a man complained about my $25.00 fee, adding with an ugly leer, “Sometimes you gotta give it away for free, honey.” I never again met with a comment as rude and suggestive as that one, but kept my guard up after that, continuing to freelance from then to today, and actually built my commercial art business based on those beginning freelance experiences.

When I began shopping around for my house in 1989 I specifically looked for a “carpenter’s special” that was inexpensive and that I could repair myself. I was more than competent at this after caring for my parents’ house and several rental places. I was told by more realtors than not that I should wait to buy a house until I was married, and often asked what my husband thought. When confirmed I was single I was told that I should buy a condominium where someone was around to take care of everything because women didn’t know how to do those things. After I found the realtor who looked past all that and found the house I now live in, plenty of hardware and home repair stores told me to send my husband down to pick something up when I walked in with clear and specific questions. Sometimes these comments from realtors and others were made patronizingly and sometimes very rude and insulting, but even though it was easy to prove I understood how to remove and replace a bathroom faucet it often wasn’t accepted. I patronized the hardware store that accepted my questions and always gave me the best products and other information I could use because caring for an elderly house is a learning project.

Those are the “highlights” as it were. By the 90s remarks like those still happened, but were more on more of a personal level than the institutionalized style I’d encountered before that. None of it ever stopped me.

With those instances in my experience and in my lifetime I have always been aware that discrimination against women was still alive and well, tucked into the corners, and still don’t take for granted that I can do what I please as I please to do it. Some communities still have laws regarding a man legally beating his wife, or that women are barred from certain types of employment. But even with laws in place, it’s our social culture that still permits these discriminations. I’m shocked by many of the current comments that people find normal about how women should be treated, and have been treated, to the amusement of others.

Not just women, but anyone who is “different”

And if those little bits of rudeness toward me were irritating, I can’t imagine the systemic and institutionalized discrimination shown toward people with a skin color that didn’t appear to be white, or people who loved someone of the same gender, or people who by no fault of their own couldn’t live normally in this society because of a missing limb, or sense, or a mental or emotional issue that kept them from being part of everyday life, or someone of a religion that is not Christian. In other words, people who did not fit the very narrow definition of “normal”, defined by whoever was in power at the time. If I feel that my rights as a woman, so long established, could be easily swept away, I can’t imagine the rights of those so newly won, in the past eight years.

Most of those in power have been white and men. When it’s taken these many years for women and others to finally feel we have protections that allow us to live as full members of our society, those who made the laws did not include everyone in the laws explicitly or by inference and we feel we need representation that resembles us and in the approximate number that exists in our population. Without it, legally or socially, the progress that has made in accepting all the diversity in this country could simply be lost.

So what were we marching for? To not be forgotten. To hold onto what we have. To be recognized. To not forget disrespectful and discriminatory remarks the new president has made. To join with each other to make something greater than we could do alone. E Pluribus Unum.

Below is a gallery of images from the march. I will caption them someday so they have a little more narrative.

And Justice For All

And here is me after the march was over. Thanks to my friend Bonnie for taking my picture! When you’re the photographer, people never get to see you.