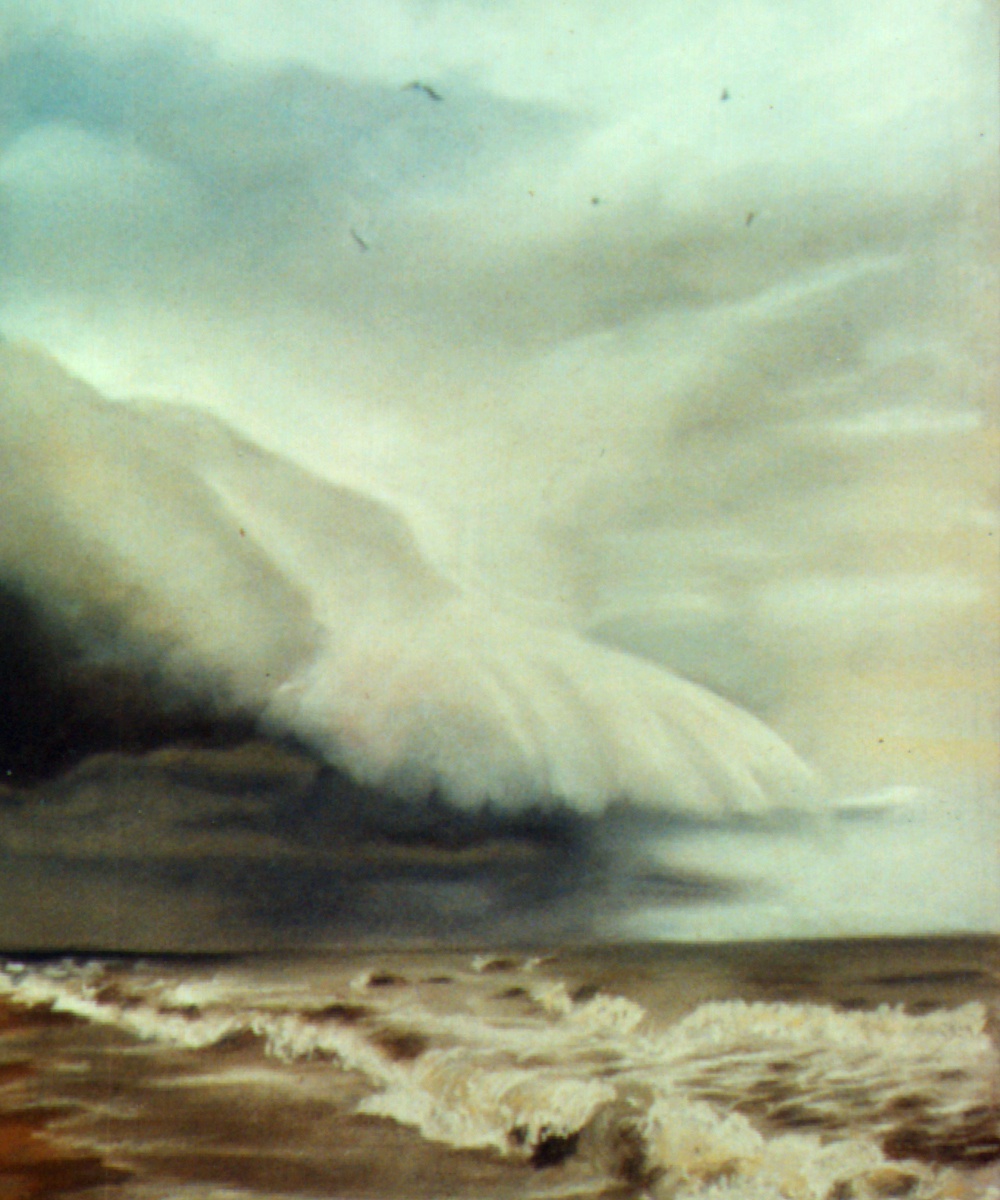 The morning’s session had gone very well. Leaping aboard her little boat, she clamped her painting onto the easel so she could study it while she washed up and had a little bit of lunch, then she’d get right back to work on it while her thoughts were fresh.

The painting was a large pastel depicting the first tinges of an incoming autumn storm, and though the morning had been hot, the sun cooking her arms and legs and reflecting from the sand up under her hat to dry her face as she stood on the beach, she had felt the first twists of a breeze from the storm, still miles away, coming across the continent to bring autumn from the mountains to the shore. Even the light was changing, dimming just a bit as a thin haze washed onto the blue of the dome overhead like the foam of waves washing onto the beach, the entire palette moving from summery bright blue and warm yellow and white to amber and olive, the ocean darkening to teal.

This was what she wanted to capture in her painting, that moment of change, and that was why the painting had to be so big. She wanted to capture the subtle change across the sky, the dimmer tones inland and brighter tones over the ocean, the first choppy whitecaps, that pathos she had always sensed when autumn crept across the palette of the land, whether in the eastern hills she had known and loved, or the shoreline she studied now. Even the heat on her skin, the flush on her face, and how cold those tiny tendrils of cool breezes had felt on her skin, those had to be in the painting too. She set up her palette of pastels on a table next to the easel, pulling the colors she knew she wanted to the front and arranging them in the way her hands knew best without the need to look down.

It was good to come in when she had, even though only the intense heat had made her stop and come in for cover. She had reached that point where she was in her painting, the point where she had to leave the reality of the physical place for the surreality of the inner place, to interpret her senses and the deeper emotions she felt but could never verbalize, only paint. That was what made her paintings different. Viewers could sense the place, and not just enjoy the view. And this was why she had won the painting contest, and this little painting vacation to visit and paint in the space of her choice without interruption. The chance to be so totally focused on her work was a rarity in her life as an artist, filled with clients and shows and costs of materials and art festivals and getting the car fixed not to mention the commercial design work that actually paid the bills. This week was the chance of a lifetime.

And it was the perfect time of year too as there was no one on the beach to interrupt her focus at this time of year. She stood back from the easel and sat down to focus once more, thinking of the empty beach, devoid of tourists in early October, adding to the sense of desolation—this beach recently filled with colorful, noisy people enjoying their time away at a place they loved, suddenly silent and the storm inching its way across the sky, sly, quiet, no thunder and lightning, just that change in light.

Suddenly she heard a pounding on the door. Startled she looked about and realized she was on her boat. She had thought she was on the beach still, painting. She stood up and noticed the light was odd. Had the storm come up that soon? That pounding and yelling—was someone on her boat? She had been tied to the dock, that wouldn’t be hard to do. But she had fallen asleep–what time was it? She couldn’t see very well—was it night? She fought her way to the door, past her painting, hoping her pastels didn’t land all over the floor, she got to the door and tried to pull it open but it was locked. How to unlock it? That knocking, it was so confusing!

Who knew her name here? Who was this? She suddenly didn’t want to open the door at all, and her grasp of where she was seemed to be fading.

Then she saw seemed to snap back to reality and recognized…her studio? At home? In Pennsylvania? What?

And the person at the door, it was Michelle. What was happening?

Then she realized, she wasn’t on the beach at all, there was no boat, she hadn’t won the contest yet. It was a hot summer afternoon and she was working from photos to create this painting for that contest. And she had gone so deeply into place to get the right feeling into the work, and laid down on the floor to think about it and rest her back, and…

I’ve been short of short stories here since I set up this site earlier this year. I haven’t had quite the time to write as I had hoped so I’m going to share a short story I wrote last year that I’ve been holding to post when the time seemed right, to help make up for that lack and because the season and time are right for this story.

This short story was a submission for the Spring 2016 Writer’s Weekly 24-hour Short Story Contest. You sign up ahead of time, and on the day and time the countdown begins, always a Saturday, the page on the WW website that includes the topic goes live and entrants get a link in e-mail.

Here was the topic:

A brisk breeze pushed through the hatchway, cooling her sunburned cheeks. Saltwater lapped at the hull. A mariner’s lullaby. She smiled, pondering her perfect life. No people. No stress. Just the occasional storm, and sojourns to the mainland for provisions. Just as her tired eyes closed, violent knocking and shouting erupted on her starboard side…

You don’t need to use the exact text or even the scene described, just use it as a starting point. I was kind of lost with the context of being on a boat because I’ve never been on a boat on the ocean, really just a riverboat here in Pittsburgh, or a canoe. I remember the word count was between 800 and 900 words.

I spent some of those precious 24 hours thinking how the heck I was going to be believable in writing about being on a boat on the ocean when I didn’t feel I could imagine it clearly enough, and decided I’d focus on being in the ocean or on the beach, which I could imagine. Quickly I leaped to painting, and then to the painting I included here, one of mine from 1993 after my one and only visit to the beach at Chincoteague Island, VA, as my inspiration for why I was on a boat on the ocean. As I wrote, the whole idea of the painting itself, the painting contest and even falling asleep, just fell right into place because I knew I’d easily fall right to sleep after being out in the sun on the beach painting for the morning.

It turned out to be great fun, and I remember that I got down to the last second to submit because I didn’t remember I had to reformat basically without formatting so that no special software was needed to read it. I didn’t win anything, but I liked how it turned out and I’m happy with it nonetheless.