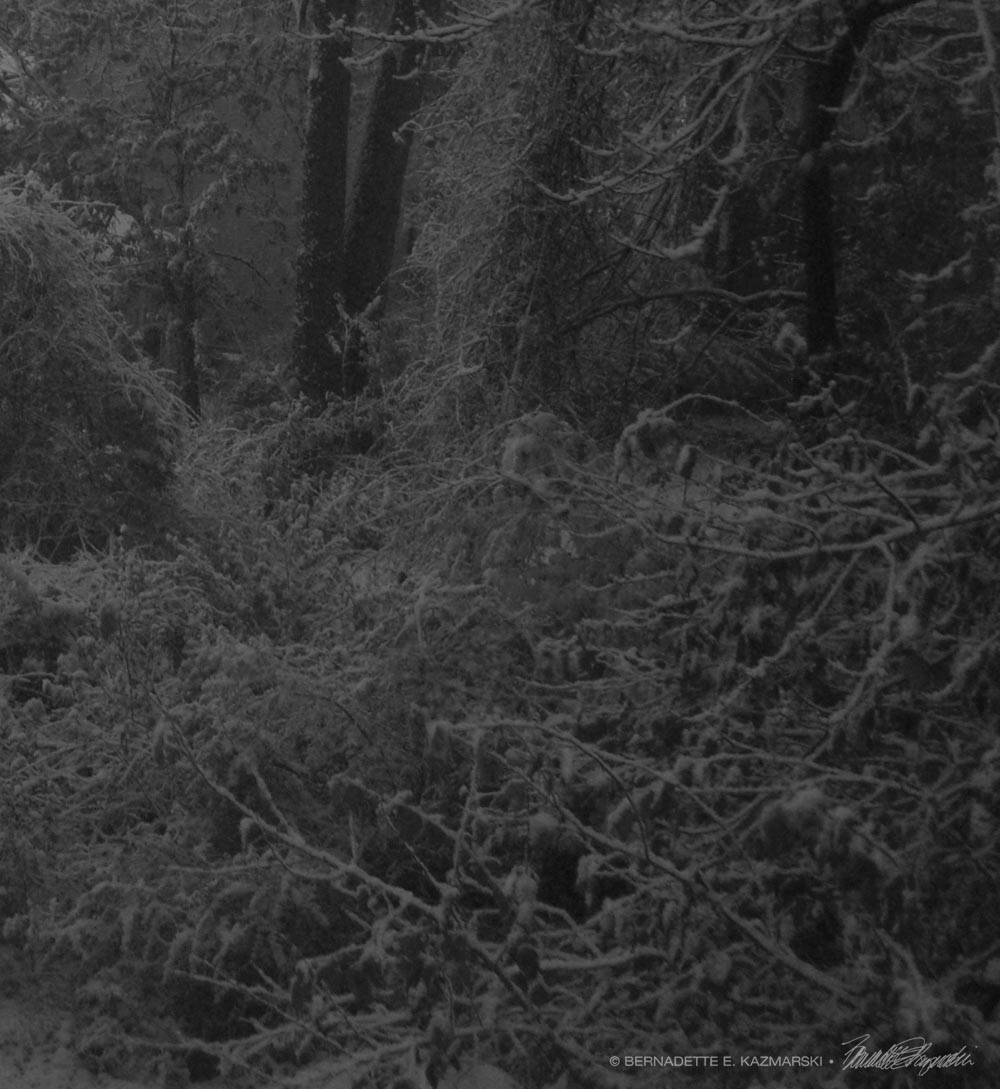 Her tears, somehow cold as they emerged, mingled with the melting of snow that relentlessly pelted her face as if to add volume to the fountain that poured forth from her swollen eyes. Her face was numb in the blizzard wind that scoured her bare skin in the frigid night, turning the tears and melted snow to ice on her chapped cheeks, constantly scraped by the glassy crystals that swirled around her head like angry bees before finally embedding their sting into her skin. She visualized her face as the smooth pale marble of a statue of some unknown saint in a church courtyard, an eternally sad and enigmatic expression in her colorless, sightless eyes, the carved lids and cheeks slowly gathering snow yet pocked with tiny droplets of blood where each crystalline snowflake had broken through the stiff skin. It had all become so surreal she played with the idea she was actually dead and hallucinating this walk through the woods as some bizarre after-life travel through a tunnel toward “the light”.

But even though she could barely see through frozen lashes, and the pain of snow crystals forced into her eyes when she tried to open them further, she knew there was no light ahead in this tortuous place, no end of the tunnel of trees rising on either side, their canopy above, the views ahead and behind obscured in the blizzard haze, and her other senses dulled by the persistent hiss and scraping and numbing cold of the storm. It was as if she walked in a bubble of her own suffering, made worse by a few falls into the deepening, drifting snow that chilled her to waves of uncontrollable shivering and obscured her footsteps, and the smooth path of what she dragged behind her. She had thought to follow her path back if she felt in danger at any point, despite any consequences, but as if to mock her the storm had worsened quickly as she traveled, its force not even broken by the dense woods, and closed in around her. Though these woods had often been a refuge, the isolation created by her dulled senses and deepening cold had made it unfamiliar and hostile. Fear began to push aside the veil that blinded her senses as she slowly acknowledged the reality of her situation.

She stopped, caught her breath, tried to still her shivering and looked around, trying to focus on objects, rocks, trees, things that were solid and tangible, trying to find a familiar pattern that might identify where she was in the woods. The wind and snow pressed against her, forced into her eyes and nose and mouth, invasive, almost smothering, even when she turned to face behind her, away from the wind. Is this real? Am I freezing to death? Was her life really in danger? What had she done? None of this was what she’d intended. She knew it would be risky at night in winter to begin with, but she knew these woods, even with paths covered in snow because their shape was easy to find as they wound clearly among the tree trunks, free of brush. Animals also trod the same paths, those familiars with whom she felt a kinship as she walked, alone, for that welcome respite of solitude and silence. She had often wanted to simply stay once she’d entered the woods and shed the cacophony of everyday life, feeling the relief, breathing more easily, smiling, feeling graceful and balanced and in time forgetting her own self, simply feeling a member of this woodland community, even in winter.

But that familiarity was not true knowledge. She only knew what she enjoyed and found familiar, not all that was there, and certainly not the woods in a life-threatening blizzard.

I got myself into this. I knew I didn’t really know the woods. I walk everywhere in all weather, but not in the woods. I should have known I wouldn’t be able to handle the weather and finding my way. Was it really worth it to take a shortcut through the woods because I didn’t want to walk all the way around on the streets, even though I was leaving later than I’d intended? Am I going to die in these woods tonight because I had to get this rocker out of someone’s trash pile and get it home before the storm hit?

This short story was a submission for the Winter 2016 Writer’s Weekly 24-hour Short Story Contest. You sign up ahead of time, and on the day and time the countdown begins, always a Saturday, the page on the WW website that includes the topic goes live and entrants get a link in e-mail. I actually won a sub-award, one of 15 door prizes.

I don’t remember the topic exactly and didn’t copy it down, but I do remember that in it the person was dragging something through the woods at night.

You don’t need to use the exact text or even the scene described, just use it as a starting point. The instructions said they liked surprise endings. With my recent experiences outdoors in sub-freezing temperatures and musings on the tenuous nature of life, I thought I’d share this story this Sunday.