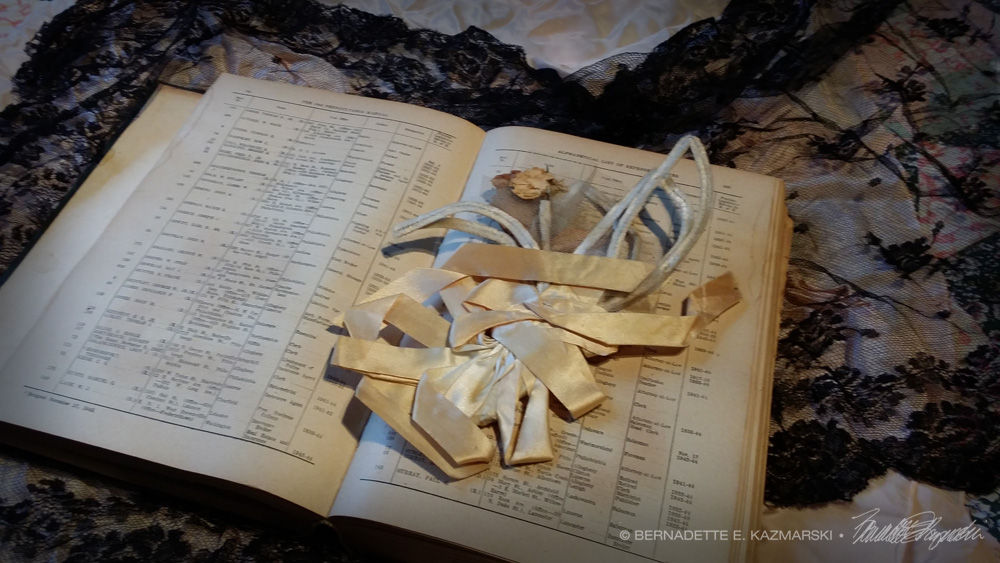 I have a book that remained in my mother’s house
after I moved her to the personal care home,
The Pennsylvania Almanac 1945,
in which were nestled
three corsages pressed flat,
spaced among the thousand pages
of information about the administration of Pennsylvania,
maps and lists and departments,
information anyone would need to know
to get things done in Pennsylvania.
But there was no information about the corsages,
the small wrist corsage with the shell-pink ribbon and small pink roses,
or the white rose with blue ribbons to be pinned on a dress,
or the creamy white bridal bouquet, two roses, ivory satin ribbon
chenille holder and ivory lace.

When were the dances, the night out, the wedding?
Do I see these in the dim black and white images
of my mother with her first husband,
right after the war,
before they married?
Is this the small bouquet she holds in one of her wedding photos,
to match perfectly the ivory wedding suit she wears?

Or are they from an even earlier time,
the love all through high school
who came back from the war and loved and left her.
You preserve a corsage because
you want to preserve the memory;
you carefully arrange the materials so they preserve the original
and the book pages pull the moisture from the flowers,
but these were dropped in a book that would never be opened again,
and the pages slapped shut,
no arranging of ribbons and lace, the flowers pressed into each other,
the whole thing nearly unrecognizable,
I know about pressing corsages;
these were left behind, ignored, but I know they were not forgotten.
Somewhere in all the stories
I will find the stories of the corsages.

The History We Will Never Know

A wide, heavy volume always occupied a space in the bookshelf near where my mother sat in the living room, along with her crossword puzzle reference books and world almanacs, dictionary and thesaurus and other reference books, near the book club novels that were still her favorites. But she regularly used those reference books and we read the novels. The big volume never seemed to move, just sat heavily and dull green, its title, The Pennsylvania Almanac 1945, embossed in increasingly faded gold on its wide spine.

I never questioned the presence of this book, never wondered why someone would want an almanac of the state’s political system and elected officials from 1945 when it was 1975, for instance, or why there was no almanac for other years. As a young reader and into my teens, looking for something to read when I’d run out of things, I’d opened the book more than once and tried make it interesting enough to follow along. Each time I carefully flipped past the corsages because the book’s pages opened to them, and even looking at the edges of the book it was clear something fairly thick was stuffed in there, a bit of ribbon seeping out.

I didn’t question the corsages then, either. Finding corsages pressed into a large book, which would flatten it and pull the moisture out of the flowers and greenery fast enough to keep it from turning brown and crumbling and thereby preserve it, was still in common practice then and dictionaries and encyclopedias were often pressed into service for this.

But when I cleared out my mother’s house as I prepared it for sale, alone there in the quiet little ranch I’d grown up in while she was in personal care, clearing off shelves, packing papers from the desk in boxes, I paid closer attention to things than before, even in the recent years she’d lived there, and found questions, but few answers.

I opened that big, ugly volume once again, carefully looked at each of the corsages, looked at where they were placed to see if the pages were a clue. The book had not been hers originally, had someone else’s name penciled onto the flyleaf so it may have been used, or it may have  been given to her, or possibly that person himself was the reason it was kept; an affair she never mentioned? Why 1945? Were the corsages from 1945? Had there been other volumes but only this one kept because it contained the corsages, and perhaps a volume of memories as well?

1945 was also the year her high school sweetheart had come home from the war but told her he could not stay with her because of his experience overseas. Had she worn one to welcome him home? Had they gone out to a dance or event? Would that have made her unceremoniously toss the corsages into this big ugly book, but carry the book around for the rest of her life, through two marriages? She certainly carried his memory actively through that time.

That was before her 1946 wedding to her first husband, my sister’s father, who they’d lost in a car accident in 1952, though they may have been dating that year. He ultimately worked for the state and possibly that had come up in conversation. Had she found this book as a reference for working with the state, and then forever associated it with him?

I also noticed the faded embossed gold, the broken binding, torn at the edges of the spine, top and sides. Any book that had sat on a shelf, rarely moved, for 60 years, would not have tattered covers. Someone besides me had opened that book frequently enough. My mother stayed up late every night of my childhood, often until dawn, after my baker father had gone to work in the day’s early hours. Had she pulled this book from the shelf then, opened the pages, touched the corsages, held those memories?

I don’t think I will ever know where they were from. But I realized on that day in 2003 when I took a good look at the book and the state of the corsages that they represented one more hurt in her long and rather sad life, one more hurt she could not let go of.

I carefully placed the book into a bag to take home, its pages literally and metaphorically carrying information I would carefully keep to discern. I asked my mother about the volume and the corsages later, but never truly received an answer. Sometimes deflection was her subterfuge for things she didn’t want to discuss, sometimes she was experiencing mild dementia. I did not press her at that time, and the work of selling the house and bringing much of what I wanted to either sell or keep came to my house so that the book was placed on one of my own shelves, then lost behind boxes of things as paperwork mounted.

The time of running my business, managing her care and my brother’s care were top of mind but in rearranging things in 2009 I found the book again, but by that time my mother was so deep into dementia she might as well accuse me of letting the turkey burn in the over as tell me once again she wasn’t sure what book I meant and change the subject. I tried, and failed, wrote a poem to hold my thoughts and let it go until later, when I had more time to consider.

The high school sweetheart left her at the end of 1945, as near as I can tell. My mother and her first husband were married in December 1946. The car accident that took his life, and nearly hers too, was at the end of November 1952. My parents married at the end of October 1955. I think of her in relation to those marriages and losses at this time of the year, especially in the dark and cold of November, when suddenly the days are short and spirits seem to moan in the first cold howling winter winds.