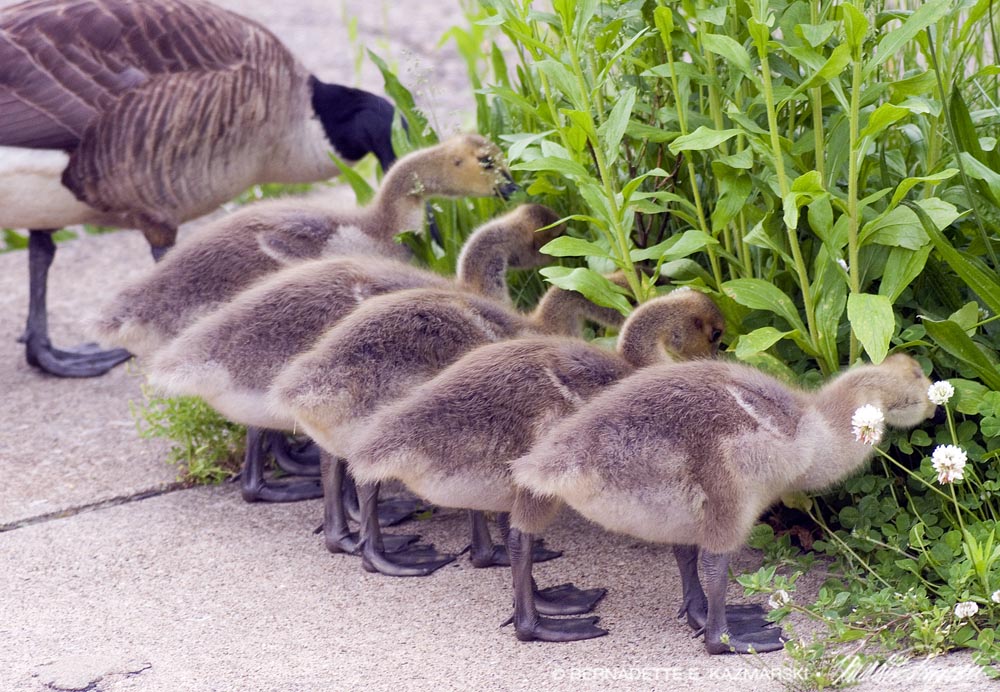 “Belly up to the salad bar!” a vigilant mother goose seems to say as the five goslings line up to enjoy some mixed grasses and clover. As I photographed I couldn’t believe they actually lined up like this. It’s a joy to watch such curious innocent creatures, like children exploring and playing outdoors at recess.

On my walk back from the dentist I saw a very large group of goslings, 14 at the highest count, being escorted along the edge of a parking lot by four or five adult geese. I decided to take a detour to stroll the sidewalk between that edge of the parking lot and the street, with the idea of photos in mind, of course, as well as simply enjoying the geese.

I took some wider angle photos to get the scope of this field trip, causing the goslings and the adult geese to move away from the sidewalk and into the parking lot. I changed to my telephoto lens so that I could get detail photos while I stayed far enough away from the little ones that the adults wouldn’t have to hiss a warning at me. Don’t mess with an angry gander.

The goslings were so happy. I don’t usually ascribe human emotions to animals, but each clump of wood sorrel they encountered growing though the cracks in the parking lot and sidewalks caused them to race toward it and bibble and dance a little as they surrounded it then began quickly nibbling with those little beaks. In all that, I simply sensed more than contentment from filling their bellies. “Look! Wood sorrel! It’s wood sorrel! My favorite! Come on, let’s race! It’s the best wood sorrel ever!” as they nipped all the yellow flowers and bits of the stems. “Look! It’s grass! Let’s go have some grass! I love grass!” The grass grew from a rectangular opening in the concrete sidewalk as if something set into it had been removed. The goslings hurried over, bibbling, and ran into the grass with innocent abandon, pushing through it, nipping a few pieces, then turning around to do it again as if they enjoyed the feeling of grass on their bodies as much as the taste of the grass.

In time the goslings grouped off with adults and each group went in a different direction, as if the parents had organized an afternoon walk, and now they were all heading home to enjoy a rest before a later meal. I followed one group of three littles and a male and a female as they moved across the parking lot in the direction I had come from.

We have quite a large flock of geese in this town who seem secure and content in where they live. They nest along the creek, and their little puffball children pop into the water from the greenery on the steep banks, bobbing up and down between two parents, growing, strengthening, evolving in their colors, and learning to be geese. Most pairs start out with six goslings or more by my observations and years of photos, but this family with only three goslings by this age is not unusual. There are predators, foxes and raccoons along the creek, there are high-water flows on the creek after storms strong enough to wash away small trees. Living outdoors in the wild fluctuations of a Western Pennsylvania spring in itself can be hazardous, and they cross the streets, oddly enough almost always at an intersection, and impatient or oblivious drivers run them over. Their parents’ vigilance is no match for outside factors.

This is the reality for geese living in the wild every day, and no doubt sometimes for domestic geese as well. Though they are protected by the Migratory Bird Conservation Act they are still hunted in season, not here, but not far from here. They are part of the food chain and their parents can’t protect them from that, or accidents.

And in this country today our human children are just as innocent and vulnerable as the goslings, even as their parents stand by and accept the fact they may be shot and killed while at school. At least the geese have laws protecting them as wild animals with punishments for persons who kills geese out of season, and in that way they have more protection than our children if someone with a gun decides to act out a mass murder, targeting the place where they gather, in school.

It seems children in school are always in season for mass shooters. Today was not a good day for 19 children who lost their lives, at last reporting, and all the children who witnessed and somehow survived the attack. We can stop this, but just as I can’t fully grasp the violent deaths of 19 innocent children in their school, neither can I fully grasp the motivations of those who will not work to control guns so that the possibility of this happening is at least reduced, or turn down the foul and angry rhetoric that intentionally depersonifies whole groups of people and infects and grows like a cancer in some minds. So again we give thoughts and prayers to the grieving families and the traumatized children, until tomorrow when we do it all again somewhere else in this country. Because we just did it three days ago with African-Americans in a grocery store.