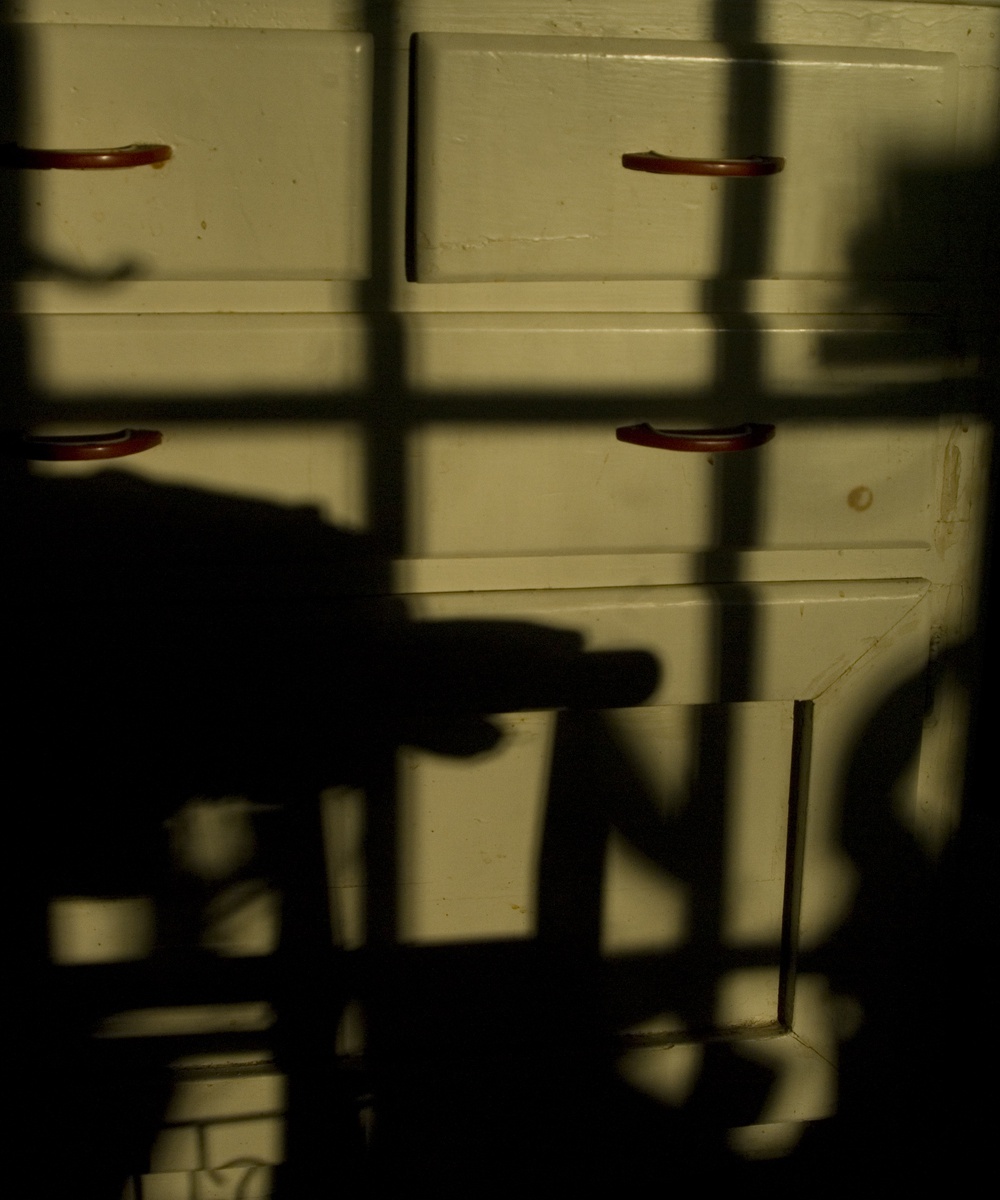 The wounds of trauma,
the sin of killing,
the witness of unspeakable acts
against the bodies and minds of others
the leaving behind of others held more dear than lovers
another world, all too real,
all came home in the duffel
unpacked into the house
worn like unwanted medals
that could not be removed
but with your hands you made this lasting monument
to prove to yourself you could still build, create, give
to start your new life,
not the one you left behind.

Several poems I’ve written are about or refer to things that I’d…found in the trash, and the stories they told me, mixed with the experiences of my own life.

Seventy-five years ago today, “D-Day”, one of the bloodiest and most critical days of WWII, 160,000 superheroes changed the course of history. Nineteen years ago more or less today, I saw this cabinet in a trash pile and it began to tell me its story. It was the story of a WWII veteran just returned home with his own memories, mixed with memories of my father and mother whose lives were both forever changed by that war.

Many homes around town had been owned and occupied by only one family from the 1930s or 1940s to today, and contain a lot of things people kept for various reasons, things that tell a story about life in that house, and the eras the house was occupied, typical of Carnegie and towns like it.

The Cabinet is so named for a cabinet I saw one evening out of the corner of my eye as I hurried off through my day. The cabinet looked to be in good shape, the drawers stacked on top, and I’d take it just to look it over, maybe I’d stop later, maybe I could pass on this one, but then I saw the little scalloped and curved decoration at the bottom. It reminded me of things around the house my father had made of wood that had just such decorations: awnings outdoors, cornices above the drapes, room dividers in our little post-war ranch house. My mother had designed the idea, my father had designed the item and made it by hand.

My errand on that evening was my daily visit to my mother in a critical care hospital. She’d had lung cancer surgery two months previous but her hypertension had caused her to unexpectedly slip into a state of dementia from which she was not expected to recover. I visited her twice each day, about mid-day and evening, and I knew I did not need to take on a stray wooden cabinet. Driving through the evening to see her the cabinet had led me to remember those projects the two had created before I was born, that I saw in the house each day when I stopped to pick up the mail and check things over; if her recovery had been as normal, she would have been back in the house, but this strange netherworld of waiting, and the quiet calm of the house with no one in it followed me as well.

So of course I swung past that cabinet on the way home from my visit to my mother, took a closer look and saw that indeed it was a sturdy cabinet, handmade with a birch wood top and red Bakelite handles very common and popular just after WWII, all the drawers were solid, and I crouched down to run my finger along that simple decorative curve, the only decoration at all added to the bottom to span from foot to foot of the cabinet just below the door with the thumb latch that held it closed.

So I struggled to fit it all into my little wagon and drive about a half mile home with the wagon door open, unloaded it and carried it into my basement for inspection. The paint was older, that shade of warm white that older oil-based paint became after years of sitting on the surface. The birch wood top was partially covered with real “linoleum” in a distinctly late-40s pattern, faded, dirty from probably motor oil, and more than half scraped away.

My parents lives had been marked by WWII, and all the indications that this had been made or at least updated at that time were pulling on those stories. My father had served in the Asia-Pacific theater from 1942 to 1945 and come home not knowing he had developed Parkinson Syndrome from a malarial fever that had nearly killed him. My mother had graduated high school in 1942, and all her memories of late high school, her early working career and life as a young adult were bound up in the American homefront experience during the war. I only heard the good stories, but in time I determined there was much sadness and pain underneath the shiny surfaces.

As I walked around the back of the cabinet, a single bare, unpainted panel darkened by age, I saw handwriting at the top. There, in pencil, was written:

And the story began to write itself of the person who’d returned from overseas with all the pain and trauma and trying to get back to “normal” life, creating this cabinet by hand, and letting this simple creative activity help to start the healing.

The story was always intended to be a short story. My mother actually recovered and lived 10 more years though she was ill and needed constant care, and many stories never came to be during that time. I still have the cabinet in my kitchen, see it, touch it, use it every day, and had to share something of it in my own creative efforts, so I wrote the poem for my 2014 poetry reading at Andrew Carnegie Free Library & Music Hall, “In This Valley”, commemorating the 110th anniversary of the merge and founding of the town of Carnegie because my parents were so much of this town, and the town itself, like so many others, was marked by that war. I read it again in my recent reading, “Walking Around”, because this finding and the inspiration for my own creation perfectly illustrate things you find when you carefully observe your surroundings, and how things we need sometimes magically appear when we need them.

I have not matched anyone from our town’s history with those initials—yet, but I hope to find a clue someday. But for the story it told me, lending its own magic to my memories and experiences, this will always be the tale. 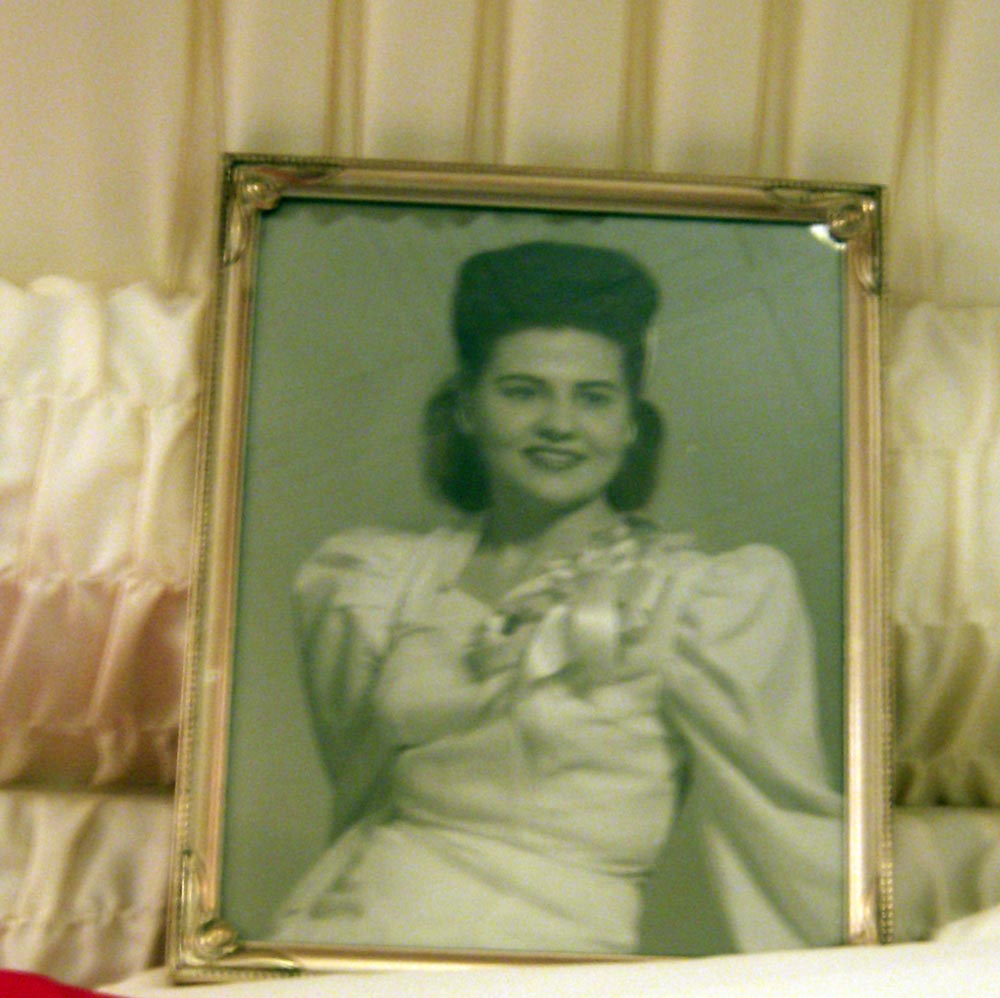 My mother died on January 25, 2011, and each year around that date I remember her in a post and share the poem I wrote for her the day she died.

She had been ill for years, and this last time she’d gone to the hospital in congestive heart failure it was clear she would not recover. Kept comfortable by the hospital staff, we waited around her bed for her last breaths.

Later, after clearing out her room at the nursing home, all the necessary phone calls, a visit from a friend and more calls, I had my time alone and was up quite late. As I sat outside in the quiet of the January night watching the snow gently fill the air and fall whispering in a soft blanket on all around me, the poem came to me in nearly one complete piece. So that I would not distract myself from the flowing words in my head I carefully went inside and tiptoed to my desk for a tablet and pen, quietly went back outside to the swing and wrote it down slowly, line for line, all as if I was afraid I’d scare it away, all the beautiful words I’d been thinking, or maybe I’d break it, like a bubble. I changed very little in a rewrite.

I read this poem at her memorial. And I had decided I would go through with my poetry reading scheduled for just two days after my mother died, because it was an opportunity to share her with others and to read the new poem.

I could never encapsulate 86 years of a life into one blog post or one photo or one poem. The photo above is the one we placed in our mother’s casket, her wedding photo from 1946 when she was 21 years old. The little scrap of red in the lower left corner is the red blouse she wore, the one she loved best, and I knew she’d want to be remembered in it; our mother was one who could wear a red chiffon blouse in her casket and be proud.

Regardless of the many outstanding qualities any person may have
we are essentially remembered for only one of them.
In my mother, all would agree
this one would be her remarkable beauty.

All through her life the compliments trailed her
as she carefully maintained “the look”, her look, so glamorous,
from tailored suits to taffeta dresses to palazzo pants,
hair perfectly styled, nails manicured and painted
a collar set just so, cuffs casually turned back,
hair worn long, past the age of 50,
a dark, even tan and shorts into her 80s,
lipstick always perfectly applied,
and even at 84
people marveled on her perfect skin,
dark curly hair,
and big bright smile.

I see that smile
when I see my sister smile,
and I see my mother’s active, athletic bearing
when I look at my brother,
and her gray eyes are mine.
In each of her grandchildren
and great-grandchildren
I see her round face,
graceful hands, pert nose,
proud upright posture
and a million other of her features and habits
and in all of us
her wild curly hair
is part of her legacy to us.

When we look at each other from now on
we will see the part of her she gave to each of us,
this little cluster of people who came from her
and who were her greatest treasure,
and when she looks at us from wherever she is
she will know that
she cannot be forgotten.